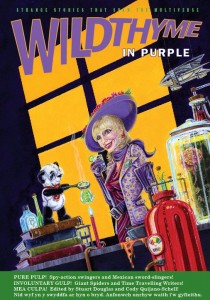 You’ve got to hand it to Obverse Books, they have an uncanny habit of putting out books with gobsmacking covers. Here’s the latest to be revealed, the striking cover image for Wildthyme in Purple by Mark Manley. The latest Iris Wildthyme short story collection will be released in November and features a story by me. But don’t let that put you off. Here’s the full list of confirmed writers to get you salivating (note, this list has been updated as of August 29th):

…and more to come…

Yummy. In other Iris related news, my story, Panda on Ice, in Iris: Abroad received some very nice comments from a reader on Gallifrey Base. While not a review of the collection, an Iris fan called Garstansinilliam wrote the following to the Obverse editors:

That made my weekend, let me tell you.

2 thoughts on “Wildthyme in Purple – The Cover is Revealed! (Plus a Panda on Ice review)”