Don’t worry, I’m not going to do this very often. If I’m honest, I don’t feel like I have a ton of advice locked in my brain just waiting to spill out and inspire all the wannabe writers out there. But the more I thought about it, the more this one little nugget kept surfacing as the most important step in my writing career (such as it is).

If I could offer one piece of advice, one thing that every writer should do if they want to sell their work, one thing that you’ve not read a million times before on countless writers’ blogs, it is the one thing I am about to impart.

Sure you’ve read about how important it is to write regularly, to hone your craft and get all those mistakes out of your system. Yes you should read plenty and learn the tricks of the trade from the writers you admire. And yes you should make friends with awesome scribes on Facebook and read their blogs. But there’s something else you need to do as well.

Back in the early 90s I was at university and dreaming of a career in writing, which explains why my degree was in computer science. I was trying to break in via Virgin Publishing and their open door submissions policy for the Doctor Who: The New Adventures line. Over time, I unsuccessfully pitched them several novels and three short story collections for the Decalog range. These endeavours introduced me to some enormously talented individuals, all of whom were great people and very encouraging, but one of whom in particular was instrumental in transforming me from hopeful wannabe into a publishable writer.

We’ll call him Writer X, because I don’t want you hassling him to do the same for you. Yeah, don’t even bother asking me.

So what did Writer X do that had such a profound effect on the quality of my writing? Quite simply, he tore my work to shreds. It wasn’t mean-spirited. It wasn’t meant to put me down or stamp on me like the cockroach I really was. It wasn’t intended to belittle me or crush my dreams. Instead it was intended to do one simple thing:

Make me a better writer.

And it did. This experienced writer was kind enough to accept my humble request to read some of my writing and let me know what he thought. He warned me he would be honest, and boy he wasn’t kidding.

What came back was a little shocking. Nearly every line was covered in red pen. Comments ranged from, “This sentence makes no sense”, to “please, for the love of God, take out this phrase”. There were a fair few declarations of “Cliche!”, along with the ego-crushing, “all your characters sound the same – in fact they all sound like you!” In summary, I was told that my plot was broken, my characters lacked any depth and I pretty much needed to go back to the drawing board and start again.

And that was bloody hard to take. I’d sweated blood on this piece — I thought it was really good! And here was some so-called expert telling me my work sucked. But then he said something that made me realise the true value of what had just happened.

He said, “If I thought you couldn’t write, I wouldn’t have taken the time to give you all this feedback.”

And there it was. I understood that at a basic level, I could be a writer. I’d need to work damn hard to reach a publishable standard, but it was an achievable goal. One day my work would be published. To get there, I would have to fix all the problems that had been pointed out to me (and a few that had not!) and never give up trying to break in and striving to improve. 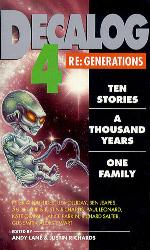 So I did. And you know what? My work improved dramatically. Oh even today, some fifteen-plus years later, I still have a long way to go, and I’ll never be the greatest writer of my generation or any such twaddle. But my writing has reached a level where it sells, and sales are hard to argue with. It wasn’t long after that experience that I sold my very first story, Approximate Time of Death, to Virgin for their Decalog 4 collection. If Writer X had gone easy on me, I never would have made that first sale.

So there you go. If your writing is not selling and you want it to sell, find someone whose work sells and ask them to rip your work to shreds. It’ll hurt like hell and it may take some time to rebuild your confidence, but you’ll be astonished at how much difference it makes.

If you found this useful, please let me know and I might do some more posts on other topics. Or I might not; depends if I feel I have anything else worth imparting. Thanks for reading and let me know if this suggestion works for you, or if you’ve already had your work torn to shreds by a pro and lived to tell the tale.

One thought on “Get your writing torn to shreds!”