So World’s Collider was published on July 10th and sold pretty well out of the gate, but then something happened on Thursday morning (July 19th) that changed everything.

This e-mail was sent to everyone in the UK who had previously bought one of Aaron Rosenberg’s books from Amazon. 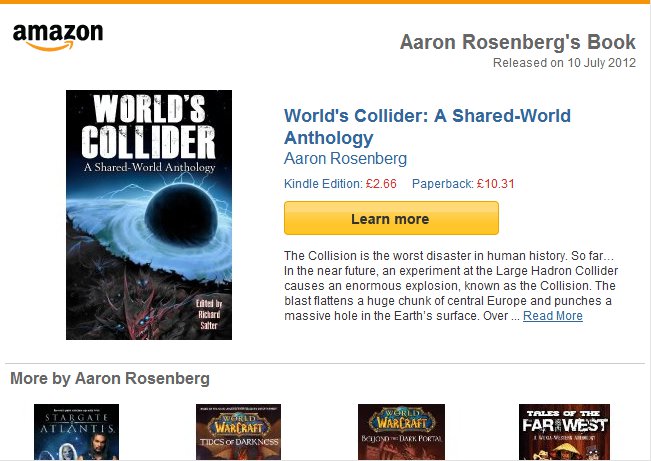 So basically, Amazon UK saw that World’s Collider featured Aaron, assumed this was his latest book (which it only sort of is) and publicized it to all his previous customers. Now Aaron has sold quite a lot of books over the years, so the effect of this mailbomb was to launch our little anthology into the stratosphere…

Here is the highest point the rankings reached on Thursday…

#13 in the Kindle Horror fiction list is no mean feat, given the rest of the top 20 is filled with James Herbert books on sale, and the likes of Dean Koontz and Amanda Hocking. Yeah, this is the PAID top 20.

Friday saw the book skirting with the bottom of the top 20, so we never broke the top ten. Still, it’s an astonishing ranking for a small press anthology.

Here’s a screen grab I took when we were #16 in Kindle horror fiction, just to prove we were up there…

To be up above a ranking of #2,000 for every book Amazon sells is also pretty impressive, I think…

Sure this is luck, for Amazon to pluck World’s Collider out of obscurity and publicize it in this way is likely an entirely automated stroke of chance. However, the fantastic cover and the enticing concept clearly helped too, translating this exposure into actual sales as people were intrigued enough to click that big yellow button that says “Learn more”.

On the US Amazon page, we didn’t climb higher than around #20,000, which shows you the difference a well-timed mailing from Amazon can make to your book sales!

Even so, the US page did manage to pick up four 5-star reviews since the launch.

I’ll be setting up a page to track reviews in the near future, but I’ll leave you with these thoughts from the wonderfully named Nessapants in her(?) 5-star Amazon review:

It was truly incredible.

Using the different authors to create a novel worked much better than I honestly had expected. I was drawn into this story of chaos and the effect on mankind and the planet. I continued to read to know what would happen next and was left thinking about the novel as I was away from it.

This book will have a lasting impact on me and I will recommend this to all I meet.

Thanks! People really seem to be digging this anthology. In the end, that’s much more important than rankings. Rankings are fun to watch though :)

Remember, you can order World’s Collider from Amazon US or Amazon UK.

One thought on “An incredible week!”