The time is nearly here. On July 10th 2012, World’s Collider will be released and you’ll be able to download a copy to your Kindle or order a trade paperback. You can even pre-order a copy now, direct from publisher Nightscape Press! The final Table of Contents has been released. You can see it on the World’s Collider page. 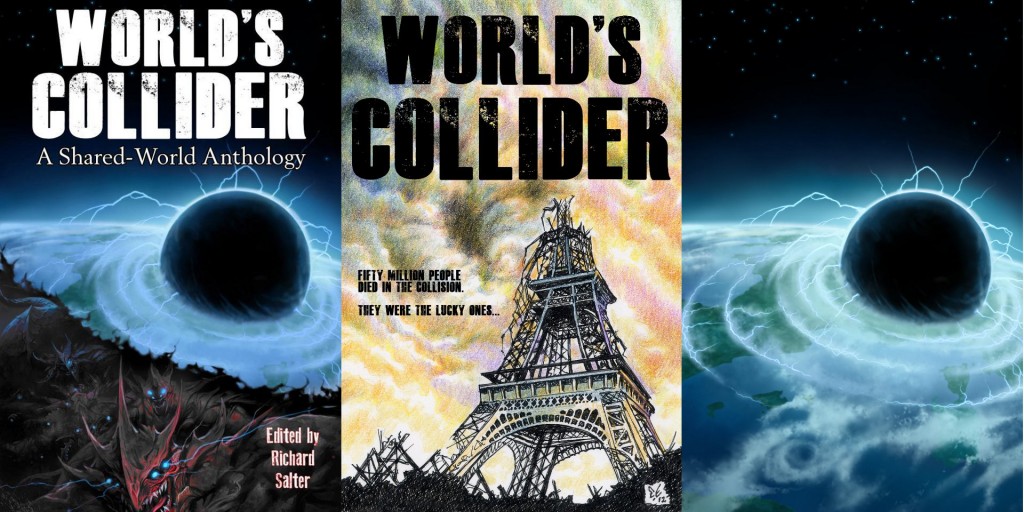 If you can’t wait until July 10th, here’s an extract from Simon Kurt Unsworth’s story, The Coming Scream.

In the middle of the afternoon one of the nurses, Scott thought her name was Rosie, stopped in the middle of walking quickly up the corridor. She took several slow, hesitant steps and halted again outside Scott’s door, turning to him.

“Can’t you hear it?” she said, so quietly that Scott had to strain to hear. “It’s so terrible. It’s so sad.”

“No,” said Scott, “I’m sorry, I can’t.” That wasn’t true, though, not quite. He had begun to hear a distant sound, behind everything else, a noise that was wrong, jarringly out of place; it was like a scream distorted through layers of material and metal and dust and bone. It didn’t bother him the way it clearly bothered other people but it was annoying, like a low-grade hangover, like toothache throbbing in the middle of his head. It reminded him of how he’d felt in those first few weeks before the thing in the kitchen, of the mild pains and the pressure he had felt behind his eyes and got strangely used to before everything went to shit.

“It’s terrible,” the nurse said again and then, very calmly lifted her hands and cupped them delicately around her ears. She opened her eyes wide; they were bloodshot, the pupils large and black. When she blinked, tears of blood spilled over her bottom lids and rolled down her pale cheeks, leaving torn red tracks down to her mouth and chin. She opened her mouth and moaned, and her teeth were bloody; the moan dissolved into a bubbling, hacking cough and she dropped to her knees, her head swaying. She spat, an indecently large mass of spittle the colour of cochineal spattering on the floor in front of her. “Oh,” she said softly, “my.” Blood trickled from between her fingers, from out of her eyes. The front of her uniform was bloodied in the cleft at the top of her legs.

“It’s so terrible, so sad,” she managed to say, and then collapsed forward, her head striking the hard floor with a wretched crunch. She twitched, blood streaming from her nose and mouth. Scott stood, unsure of what to do. He had no medical training, was wary of doing something that might make things worse. He wanted to go to her but couldn’t get close without stepping in the increasing pool of blood, which struck him as strangely disrespectful. Instead, he pressed his bed alarm and then started shouting, waiting for someone to come and help him with her.

It was fifteen minutes before anyone arrived, and then they simply loaded the nurse onto a trolley and took her away without a word.