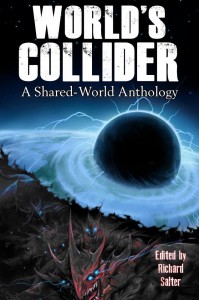 There have been lots of fantastic reviews for World’s Collider recently, but the most unusual is certainly this one from Il Futuro E’ Tornato. Yes, it’s all in Italian. You can try Google Translate, like I did, but you’ll find the result is rather garbled. It’s difficult to tell whether or not they like it at all! So I turned to an old friend of mine, Tristan Tarrant, a genuine Italian and one of my old university housemates. Tristan graciously agreed to translate and you’ll find the readable English version at the end of this post.

Before that, I can announce that World’s Collider will be free for two days starting Tuesday November 27th. Get it from Amazon US or Amazon UK for your Kindle for zero cash. Next up, here’s a roundup of some other reviews we’ve received.

This from Patrick Mahon at SF Crowsnest:

I imagine that editing this project into a coherent novelistic narrative must have taken quite some effort. Not because these guys can’t write. They can. However, there are a lot of different characters and sub-plots going on here and it would have been easy for the unifying thread to get lost. The fact that it doesn’t is a testament to all concerned.

If you are an aficionado of short stories or prefer novels, if you tend to the gritty, the gory, or the understated inevitability of struggling in the face of adversity; if you like a rocking good tale regardless of the byline; if you like going places you’ve never been before (and hopefully never will be!), then find yourself a copy of World’s Collider.  It will make reading the science section of the newspaper something you’ll never take for granted again.

Overall, World’s Collider has some excellent moments of creep and horror, with perhaps a slight touch of fluff on the edges. But if watching the world burn down slowly is your idea of fun, you’ll find many reasons to pick this anthology up.

The book might not work for everyone, as it is not quite fish nor fowl due to its experimental nature, but I appreciated the concept and its execution, even if it wasn’t completely flawless. If you’re a fan of anthologies and would like to see what the form can stretch to, World’s Collider is well worth a read.

Our most positive review comes next. Katy O’Dowd of The British Fantasy Society goes gaga for all things Collider…

Believe me when I say this book is awesome. There aren’t enough different words for the word love to let me tell you how much I loved it. The concept, the writing, the mash-up of horror, sci-fi and fantasy, the tying together of the narrative throughout the book which is so superbly done. Beauteous to behold this strange, horrible-yet-vibrant new world.

It’s thrilling to get such great reviews. It validates all the time and effort put into this project by everyone involved.

So here it is…

Before talking about the book, a premise must be made: the concept of sharing a common settings to handle a certain number of stories (both short stories and novels) is largely applied both in SF and in fantasy writing and has made the fortune of several editors as well as offering the opportunity for new authors to get on the market.

Under this aspect the anthology which we are looking at today is not that different from other products with one notable exception: thanks to the work of the curator and of the authors this book is really cohesive both in themes and in writing quality.

Which brings us to a second concept, bound to anthologies in general. Often, if not nearly always, the level of the stories is discontinuous no matter how famous the authors involved are.

As I said above, in this case there are no discontinuities but this does not mean that the quality level of the stories has been flattened to the lowest common denominator. In fact the effort that was put into achieving a high level of quality is tangible.

The book deals mostly with the survival theme, with a heavy accent on horror rather than on hard SF. This choice is actually the weak aspect of this book, which could have dealt a bit more with the scientific aspects of the situations. In the concepts of parallel worlds and space-time distorsion there would have been enough material to give the stories in this anthology even more depth.

Richard Salter, the curator and coordinator of the project has put together a great team of professionals with great experience and semi-pros who have made themselves known in the world of fandom (mostly from Doctor Who). As said before the anthology consists of 18 contributions even though one story “Keep calm and carry on” is divided in 4 parts.

It is difficult to make a chart of the anthology to indicate which are the best or worst stories. As I said earlier a great deal of work has gone into make the whole homogenous. Usually it is difficult to close such a narrative arc, but Savile and Lockley in “Lost Souls” have made a really good job. As the curator says in the premise more stories will be created in the same setting, although we don’t know if in the same temporal arc as in this book or set in the future. One of the first will be a novel written by Salter himself.