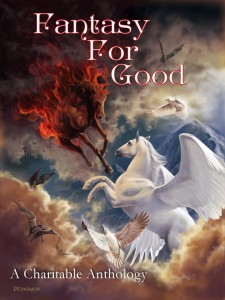 Apologies for the silence on this blog over the past month or so. I’ve been travelling the last two weeks and before that the day job reared its time-consuming head and swallowed me whole. But now I’m back with some news on Fantasy For Good, the charity anthology that Jordan Ellinger and I are editing for the benefit of the Colon Cancer Alliance.

Previously we announced a reading window for open submissions ranging from July 1st to August 31st (see the guidelines here). We have decided to extend the window for one month, so it will now close on September 30th. If you’ve already submitted, thank you. You don’t have to do anything, but you won’t be getting a response until after the new window closing date. I am sorry that you will have to wait longer for good news or bad, but I promise that every response will include a reason for why your story was accepted or rejected. No form rejections here.

We have extended the window for two main reasons:

Firstly, we recently discovered a couple of forums where folks were interested in submitting to the anthology, but were put off by such a short time left before the deadline. If they had heard about it earlier, they would have definitely submitted something.

Secondly, and this is the major reason, we’re behind schedule in reading all the stories submitted so far. It will take us some time to catch up, so rather than have people rush to send us their story by the deadline and then have it sit unread for a month, we thought it better to extend the deadline and give everyone some more time to get their work finished.

We will not be moving the deadline again and we are still on track for releasing the anthology in March 2014.

More updates and announcements are on the way. We’re in talks with all sorts of exciting names, and we’re almost ready to release some new details so please stay tuned to the Fantasy For Good page and give us a ‘like’ on Facebook. Thanks!