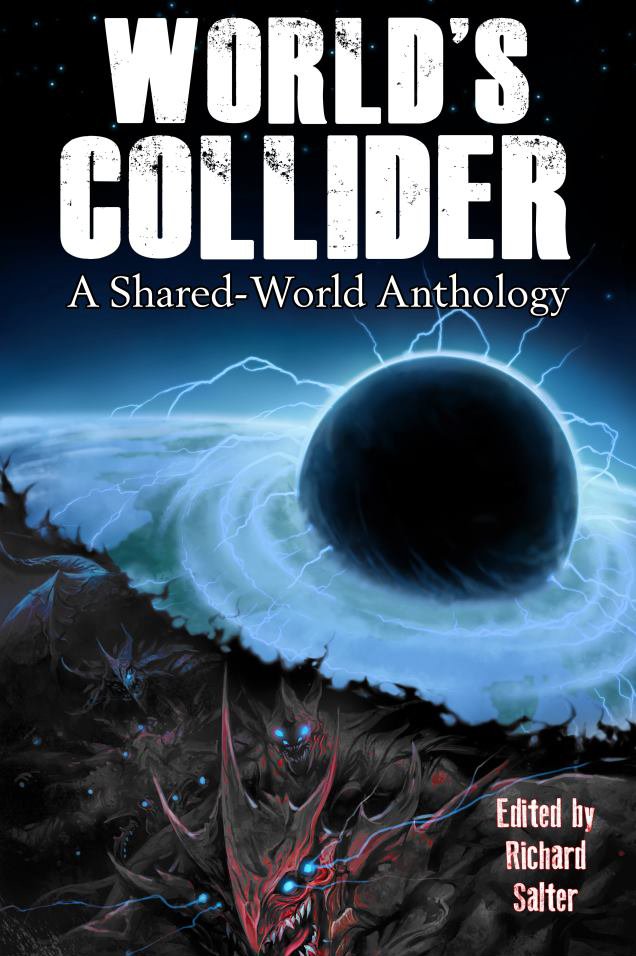 The Collision is the worst disaster in human history. So far…

Available for your Kindle

And also in trade paperback

Or order direct from Nightscape Press

In the near future, an experiment at the Large Hadron Collider causes an enormous explosion, known as the Collision. The blast flattens a huge chunk of central Europe and punches a massive hole in the Earth’s surface. Over the next decade, unspeakable horrors pour from the rift: vicious creatures with a taste for human flesh, a terrible scream that drives all who hear it insane, a phantom entity that feeds on fear and paranoia, and a nightmare train from the pits of hell, to name but a few. This onslaught of terror causes the collapse of civilization and threatens to wipe humanity from the planet.

World’s Collider is a unique concept in short fiction, where all eighteen original stories are part of a common narrative, recounting the disaster and its aftermath. A true novel by many voices, including Steven Savile, James Moran, Aaron Rosenberg, Trent Zelazny, Jonathan Green, Simon Kurt Unsworth, Dave Hutchinson, Kelly Hale, Richard Wright, Jordan Ellinger and a host of new talent.

Fifty million people died in the Collision. They were the lucky ones…

“Editor Richard Salter has overseen the creation of a chilling hi-octane future in which reality has been warped into nightmare by scientific disaster.  Each component cranks up the tension and the disparate tales combine in mosaic-fashion to deliver a truly gripping narrative.” – Ian Whates, author of City of Dreams and Nightmare and The Noise Within, and editor of Solaris Rising: The New Solaris Book of Science Fiction.

“…in this world, if the folks at CERN have found the ‘God Particle’ then God is H.P. Lovecraft” – Dark Media Online

“I was thoroughly involved in this ghastly scenario from the first story on.” – LitStack

“…this book is awesome.” – The British Fantasy Society

World’s Collider is available for your Kindle from Amazon UK or Amazon US.

If you’d prefer a gorgeous looking trade paperback, you can order one from Amazon US, Amazon UK or direct from publishers Nightscape Press.

Artwork has been provided by Carolyn Edwards and Lukas Thelin of Foxrain. Read the story behind the cover.

We are running a series of interviews with World’s Collider contributors on this site and you can now read an extract from Simon Kurt Unsworth’s story, The Coming Scream. There is also a roundtable interview with nearly ALL our writers now available.

If you are on Facebook, please “like” the anthology’s official page for all the latest updates, and check the news page on this site too!

Here is the full Table of Contents

The Rise and Fall of the House of Ricky     Kelly Hale

What Little Boys Are Made Of     Nicholas Blake

Beyond the Sea     Dave Hutchinson