We’re back with another in our ongoing series of interviews with the writers of World’s Collider. The previous interview with Jonathan Green was clearly too much like hard work for this editor, so already I’ve recruited someone far-better-at-this-sort-of-thing (TM) to do all the heavy lifting. I simply have to post the result, slap a few book covers here and there and take all the glory. It’s a pretty good deal if you ask me.

So here it is, the World’s Collider Interview with James Moran, who is famous and everything. He chats to Elise Hattersley about his career so far, his melty TARDIS-brain and how much I hate him for getting paid to write a TV episode of Doctor Who.

James, you’ve pretty much done it all – you’ve written Severance, which was an instant cult classic, you’ve got two more films on the way, and you’ve written for Doctor Who and Torchwood. Do you have any unfulfilled dreams left? 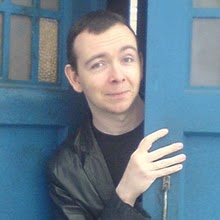 Immortality. Telekinetic powers. The ability to transport myself. Basically I want to be Sylar. Doctor Who was a huge dream, so everything else is a bonus. Although I’d love to create my own TV series (something that’s in the works, slowly but surely), direct a film (also in the works), and get a creator-owned comic off the ground (not yet in the works, call me, etc). I’d really love to work in America too, so if any TV or movie producers would like to hire me, I’m available and not that expensive yet. I’d kill to write for Leverage. Seriously. John Rogers, if you’re reading this, in exchange for an episode, I will kill one person of your choice, no questions asked.

You mention Doctor Who – what was it like, getting to work on such an iconic show? Were you at all intimidated by its cult status?

Dream of a lifetime, and hugely intimidating. You’re trying to tell a good story, please your own inner child as well as your adult writer self, and somehow pay respect to the years and years of Who history. And then you remember how many millions of people watch every week, and it all melts your brain slightly. Once you get past that, you write INT. TARDIS and your brain melts again. Once you get past THAT, you have to just put it aside and try to tell the best story you can. It was great fun, scary, exciting, joyful, and quite, quite mad. I wish I knew then what I know now, I’d love to write an episode without feeling quite so much terror.

Your episode, The Fires of Pompeii, tied in really nicely with the Doctor’s unique sense of timey-wimey morality. Is that a subject you’re particularly interested in?

Yes, I’ve always enjoyed playing around with the consequences of time travel, and ever since seeing Genesis of the Daleks I’ve been obsessed with that kind of awful choice. So right from the start, when trying to work out what the story would be, I knew that at some point I’d make the Doctor choose between saving Pompeii and saving the world. Also, it had to mean something, so as not to make light of the fact that a lot of people actually died in this event. I wanted people who’d never heard of Pompeii to feel sad for the victims, and remember them.

At what point did you realise you wanted to be a professional writer? And has realising that dream cost you any of the enjoyment you once took from writing?

I always wanted to do it, but never thought it was actually possible. I remember having a story read out in class at the age of 4, and getting applause, so ever since then I hoped it would happen. Been telling stories ever since. Wasn’t until 2000 that I realised it was a genuine possibility. Hasn’t cost me any enjoyment, I enjoy writing more than ever, now that I know there’s a good chance my work will be seen/read by more people.

It’s said that Severance came forth after you’d had a bad, yuppie-infested commute. Do you often find your inspiration in real-life situations?

All the time. Everything scares me, and that feeds into my work. What’s the worst that could happen? What if this train derailed? If we all got trapped here, which one of these people would I eat or have sex with? I’ve been daydreaming my whole life, thankfully now I get paid for it.

A lot of your work offers a rather cynical look at the world. Are you a cynic, or is this a case of stepping outside yourself and writing from a point of view that’s pretty alien to your own?

I’m pretty optimistic about the world, and believe people can be amazing. But sometimes people terrify me, and I’m curious to know what makes some of them go down certain paths. It doesn’t take much to make me despair for the human race, I just have to indulge that feeling a bit. And sometimes I crave a happy ending, because too often the real world doesn’t provide one. Usually I like punishing bad guys and rewarding the heroes.

Girl Number 9, one of your most recent works, is a made-for-the-web thriller employing some well-known faces from the television. How different is it, writing for an online audience?

The only difference was, I didn’t have to worry about the audience. There was no channel, no timeslot, nothing like that, I just told the story I wanted to tell – and hoped that the people who liked that sort of thing would find it, which they did. It was fun to have no expectations or rules, so I was able to go crazy with it. I’d love to do more web stuff, but very few people in the UK seem to be funding it – there’s a whole industry in the US, but we haven’t quite caught on here yet.

You directed half the episodes of Girl Number 9. Is that an avenue you’re interested in pursuing further in the future?

Absolutely, I directed a short for the FrightFest horror film festival (H33), which was great fun. I’ve got a couple of things in the pipeline that I’m aiming to direct, fingers crossed. Directing is kind of like re-writing, you get to bring a whole new set of tools to work.

What attracted you to World’s Collider in the first place?

The concept was so much fun, and I’ve never done a short story outside of the Doctor Who universe, so I wanted to see if I could. Also, Richard Salter commissioned my first ever published short story in Short Trips: Transmissions, and he was fantastic to work with. WAS. He’s gone bad now. Really really bad.

Which part of working on World’s Collider have you enjoyed most, so far?

Although I kept forgetting to check the page, I really enjoyed the writer’s group on Facebook, with the combined brain power of all the other authors – there were so many great discussions about the rules and characters and so on. And the challenge of it – there wasn’t much time, there were some very specific rules in the brief, and I didn’t know if I could do it. Always fun to scare yourself…

You’re no stranger to collaborative work – your work on Torchwood, co-writing that third episode of Children of Earth, for example, was a collaborative gig. Do you find it easier, or harder to work with others?

Bit of both. Torchwood and Who were the best possible collaborations, they were full of smart, fun, creative people, and you’d bounce ideas around, ending up with something better than anything you could have come up with alone. Then you’re always supported at every step, even when you go home and have to write the thing, you’re never really alone. They have no ego, it’s all about making the best show possible. To balance that, there have been some collaborations where people had their own agenda, and behaved selfishly, to the detriment of the project, show or film, he said vaguely so as not to give away what he’s talking about. There have been sadly lots of the latter, and not many of the former. Pick clever, nice people to work with, kids.

You’ve dabbled in a variety of genres, but there is always an element of horror in your work. When did your love for horror start?

Childhood, with the movies I wasn’t allowed to stay up and watch (but managed to when unsupervised). I hated being scared, but kept subjecting myself to it, for some reason. Maybe it was to prove I could handle it, or I somehow knew it was a good way of experiencing the darkness in life without any real danger. Also, it was fun, and the stories were usually more imaginative.

Is it awkward writing prose amid a rather illustrious screenwriting career?

It really is, because you pick up lots of bad habits writing scripts – grammatical errors and clunky phrases that don’t matter because people will watch the finished product, and won’t see how awkwardly you described the action. In prose, it’s just you and the words, there’s nowhere to hide. I find it quite difficult, and scary. Scripts are my preferred format, I love how you can paint an actual movie or TV show on the page, without having to stop and tell everyone what the room looks like in detail.

And finally – you wake up tomorrow, and the Rift has opened. What would you do?

Get the hell away from it. My mum didn’t raise any idiots.

You can visit James’s site here, and check back soon for another in our series of World’s Collider interviews!