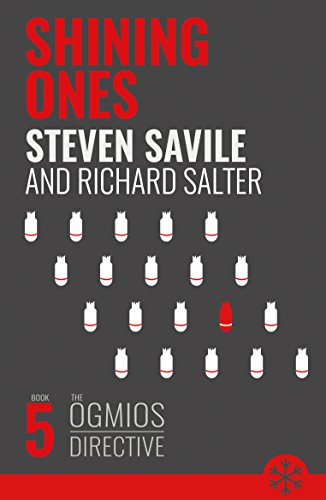 Shining Ones is Book #5 in the Ogmios Directive Series, the prequels to the mega-successful thriller Silver, by Steven Savile.

Jude Lethe is not a field agent. He’s the behind-the-scenes technical whizzkid who makes it possible for the Ogmios Special Ops to operate effectively. Sir Charles Wyndham’s covert team relies on Lethe for vital mission data, access to protected systems, real-time surveillance and for covering their tracks. Without him, Ogmios would cease to function.

Now an old friend of Wyndham’s, Professor Camila Morais, needs help. Her search for a lost Inca city stalls when key members of her team are kidnapped from Lima airport. A reluctant Lethe is dispatched to provide technical help, with Noah Larkin as his bodyguard.

But Professor Morais is not the only one eager to find the secret city hidden deep within the Andes. An old terrorist organization is about to reveal it is anything but extinct. The Shining Path have returned, and their plans will have a profound and deadly effect on Peru, the continent, and the world.

With Noah missing and no way to call for backup, the only ones who can stop the terrorists are the granddaughter of a Nazi war criminal and a nerdy British hacker, whose skills may provide his enemies with the greatest weapon of all.

Jude Lethe is not a field agent, but he’ll have to step up fast to prevent the deaths of millions.

It was a pleasure to read such a good and well written story. The characters made me care about them, although the bad guys were pretty much all bad. I want to go back and read earlier books in the series — Deborah Wall McGraw

Fabulous addition to the Ogmios series of novels. This time Jude Lethe, the computer genius is taken out of his comfort zone and has to stop a South American terrorist organisation from carrying out the most terrible of atrocities. A great actioner which demands turning another page — Pat on Goodreads