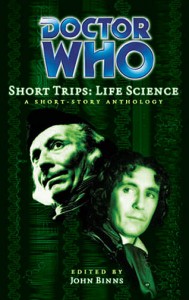 A Star is Reborn was my attempt at doing comedy with Colin Baker’s Doctor and Peri. It was fun too write but I was much less happy with how it turned out than I was with Deep Stretch, written around the same time. Conversely, reviews seemed to like the Life Science story more, which proves I am no judge of my own work.

This review in particular was a delightful surprise. The last but one paragraph says:

My very favourite is another Sixth Doctor story, A Star is Reborn, which remains extremely witty throughout, despite its grisly subject matter, as the Doctor jumps to a series of unfortunate but quite understandable erroneous conclusions.

And Mr Styre seems to concur.

A Star Is Reborn — Richard Salter — Humorous, especially the “Military Hardware” joke, though that’s an interesting direction for the story given its setting. Still, Salter pulls off the switch with aplomb, and does a fine job of making an early Colin/Peri pairing likable.

The Discontinuity Guide however agrees with my assessment.

A bit daft really. It’s nowhere near as amusing at it wants to be and the title is an atrocious pun.

So now we know.