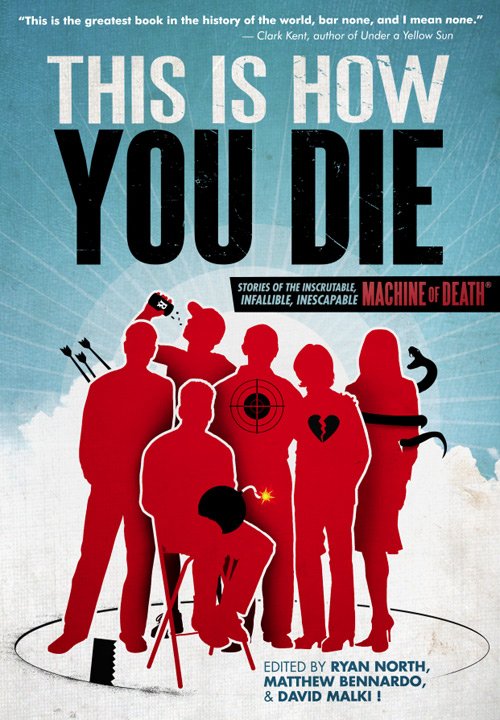 This Is How You Die is the follow up to the enormously successful, internationally famous Machine of Death. My story, Your Choice, made the cut despite going up against over 2,000 submissions! This is both amazing and very humbling, and I’m absolutely delighted to be a part of this ongoing phenomenon.

Mine is a choose-your-own-adventure style story, but more than that I can’t say. It was a blast to write, though it took a lot of effort to get all the various moving parts lined up. I’m delighted that editors Ryan North, Matthew Bennardo and David Malki really got it and liked it enough to include it in their exciting lineup.

The compelling cover is by Justin Van Genderen. The book will be published in July 2013 by Grand Central Publishing and debuts at San Diego Comic-Con!

Here’s the Table of Contents so far!

• “YOUR CHOICE,” by Richard Salter

• “TWO ONE SIX,” by Marleigh Norton

• “EXECUTION BY BEHEADING,” by Chandler Kaiden

• “OLD AGE, SURROUNDED BY LOVED ONES,” by ‘Nathan Burgoine

• “MADE INTO DELICIOUS CHEESEBURGER,” by Sarah Pavis

• “IN BATTLE, ALONE AND SOON FORGOTTEN,” by Ed Turner

• “NOT APPLICABLE,” by Kyle Schoenfeld

• “MONSTERS FROM THE DEEP,” by David Malki

Keep checking the Machine of Death site for more information!

One thought on “This Is How You Die”