I’ve been sitting on this for a couple of days and frankly it’s been rather uncomfortable. Now, however, I can reveal the awesome news. Remember this? 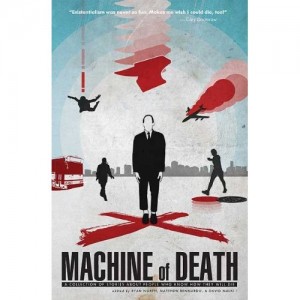 It’s called Machine of Death, and it’s the anthology that caused quite a stir and became an Amazon #1 bestseller, beating out Glenn Beck’s book in hilarious fashion. If you’ve never read it, you can buy it in bookstores or even read it online for free. It’s all about a machine that can tell you how you’re going to die. It’s a simple premise, strong enough to spawn a sequel. And yes, you can probably tell where this is going.

This would be a big deal on its own. It’s an even bigger deal because the editors selected just thirty stories out of 2,000 submissions.

Yeah, you read that right.

Just take a moment to have a think about what that means. I had to choose from 80 story pitches for World’s Collider. I can’t even begin to contemplate picking 30 from 2,000!

More details as I have them. The story is called Your Choice and is structured in a way I hoped would be unlike any other submission (and clearly I made the right choice!) I am thrilled and excited to be a part of this and I want to thank Ryan, Matt and David for selecting it.

3 thoughts on “Some astonishing news…”